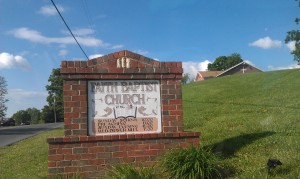 We had the privilege to be with Faith Baptist in Staunton, VA this past Wednesday! We were moved by Pastor Brown’s passionate preaching! In the middle of the service he announced they wanted to support a Rebel going to Japan and took us on for support on the spot! I joke around that the first time I heard Rebel’s name it was love at first sound, and I’m loving her more and more each day!

After church, we went out with the Pastor and his family for supper. I didn’t realize it, but the Smallwood family was there. David Smallwood was in OH preaching a meeting, but we were thrilled to spend time with his family. I still remember his messages he preached while I was in high school. It was then I surrendered to be a missionary to Japan, and I believe the Lord greatly used Bro. Smallwood in my life!

During supper, we had the opportunity to witness to our waiter, John. I explained that we are missionaries to Japan. That’s when he told us he was attending a Kingdom Hall and interested in missions. I began to explain that we were going to Japan to preach the Gospel. What a door to talk about what that is! I explained that salvation is not about what we do or our good works. It is all about what Christ did for us. It is by grace, through faith and not of works. He began to open up to us about some things that he had read in his Bible. We didn’t have a lot of time to speak with him, but we were able to convey the Gospel. Pastor Brown told him that they could meet sometime and discuss what it further. John was excited about that! I ask that you would pray for him, and that he would accept Christ!

2 comments on Rebel Support, Smallwood Family, and a JW