Hanamaki Is a city whose population reaches to about 100,000. Hanamaki resides in the center of the Iwate prefecture which dwell towards the north of the island of Japan. The city is situated at the joining of the three rivers: Sarugaishi-gawa, Se-gawa, and Toyosawa-gawa. The valley in which the city resides is surround by the mountains  Matsukura and Hayachine. Hanamaki is home to some rather interesting attractions. One of the aforementioned attractions is the hot springs (or onsens). In fact, these onsens bring most of the tourism to this city. Along with the onsens, Hanamaki is also the birth city of famous Japanese agriculturalist and poet, Kenji Miyazawa. Due to the abundance of mountains in the region the city is also known for its ski slopes. However, as interesting as all of this is, it is not why you are here reading this. As previously stated, this city contains about 100,000 people, that is 100,000 souls that have little to no gospel witness in their midst. As beautiful and attractive as this city is and as awesome as it would be to visit and take in the local attractions, it doesn’t change the fact that many of these people live their entire lives never hearing the good news of Jesus Christ, This beautiful city needs our prayers and it needs men and women willing to give their lives to reach these people. 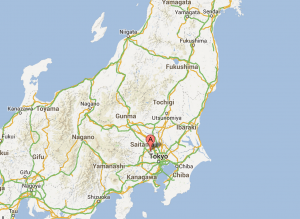 Like most other large cities in Japan, Fujimino, has many claims to fame, but I want to look at one of its most famous visitors, Tokugawa Ieyasu.

If you go to Fujimino right now, you’ll find a bustling metropolis with factories and acres of asphalt, but in the 1600’s it was a farming community with a beautiful river cutting through the deep green valley.

Tokugawa Ieyasu had been fighting on and off his entire life, and in 1603 he won a decisive battle and gained the title shogun at the age of 60. The word shogun means “military commander” but in practice it meant Ieyasu (ruler of Japan.)

After 50 years of fighting, though, he had a real problem. The people of Japan had learned that war was life. Every grown man was a warrior. It would be difficult to unite them and keep peace over a land where most people had known only battle for most of their lives.

So he created a strict set of rules to govern hunting and used it as a tool to transform the wartime violence of the past into a peacetime competition among equals for bragging rights. Effectively, he replaced war with hunting, and it worked. The status symbols of the day changed from war-trophies to prized birds of prey.

You may ask why this matters, and that would be a fair question. Tokugawa Ieyasu wanted to create a dynasty and to do what he needed for political peace united under him. He cleverly overcame the specter of war from Japan’s past, but there was another problem that he couldn’t figure out how to turn to his advantage: Christianity.

In 1614, as a last resort, he banned Christianity from Japan by signing the Christian Expulsion Act. He literally exiled Christians from his country, and he made no distinction between Catholic and Protestant. He thought they were all just too much trouble.

Amazingly, Ieyasu’s plans worked out as he’d hoped and his family ruled Japan for 250 years, but he unwittingly sentenced himself and his people to an eternity separated from God.

It wasn’t until 1871 that freedom of religion was reintroduced in Japan, and even after that there has been very few Christian missionaries entering the country. It’s estimated that less than 1 million Japanese have trusted Jesus Christ as their only hope for salvation.

What does all this mean? In a nutshell, Japan is like any other country: it needs to hear the Gospel, and that just isn’t happening in the vast majority of Japan! We’re too far behind. We need more help. In fact, we need your help. Would you join us in our endeavor of taking the Gospel to Japan?

There are several reasons that I like the original Karate Kid, but one of them relates directly to today’s Key City: Kanuma.

Ever seen one of these?

I remember Mr. Miyagi slowly, carefully pruning and training this strange little plant, and I was hooked. Thank you Japan for another awesome addition to my life! Ok, back to the story…

Bonsai trees don’t have what’s known as a taproot. That’s the deep root most plants have that gets down to the really important nutrients and water in the ground. Basically, this means that bonsai trees can’t grow in most places, because the soil isn’t good enough. That’s where Kanuma comes in.

Kanuma has a very special type of soil called Kanumatsuchi. A nearby volcano, Mt. Akagi, erupted and rained ash all over the region. Over the years, it mixed with the local soil and became something new and valuable. The soil from this region is more than twice as good as other cultivated soils at absorbing air and water, with better permeability and drainage.

People from all over the world buy bags of dirt from this city because of its “good ground.” We think that there is some good spiritual ground there, too. When we take the gospel to these people, the Word of God will find some “good ground” and bear fruit. Pray with us that among the more than 100,000 people in Kanuma City, we will find a fertile place to plant the seed of God’s Word.