Sunday, we were up early for our meeting at Antioch Baptist in Sunset, SC. We were blessed to be with this church and the Pastor, Barry Pace! Bro. Brian, in Sunday School, taught on the trumpets of the tribulation in Revelation, and did a great job of taking a complex passage and teaching it simply! What a blessing to be with people that love the Lord! After the service, we were invited to eat with the Holcomb family for their family reunion. There’s no better eating than a potluck dinner at church! Thank you for inviting us, and treating us like family! 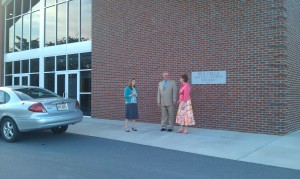 Sunday night, we were at Mile Creek Baptist in Six Mile, SC with Pastor Jim Roberts III. What an amazing Church, filled with love for missions! Last Saturday, they had a fund raiser for Jim Roberts IV, who is a missionary to India and a dear friend of ours. I believe they were able to raise $2,000 for the ministry in Inda! It is astonishing to see God work through His people!

Not only did Pastor Roberts let me preach, but they also voted to take us on for support! We are so thankful to be partnering with such a wonderful Church! Thank you for letting us come and share our heart for Japan!

Why is there a picture of a rock on my post? I’m glad you asked! Saku City is famous for many things and one of them is this rock. What makes it significant? Well, for one it is called Funa Tsunagi Ishi, which is just fun to say! Though its english translation of “Boat Connect Stone” is not nearly as thrilling. The city is divided by the Chikuma River and is prone to flooding. It’s inconvenient now, but was often devastating in centuries past. Bridges were constructed to connect the two halves of the city, but would soon crumble because of flooding. The continual rebuilding of bridges was becoming a finical burden. Therefore in 1873, it was decided to put 9 boats side by side across the width of the river and a plank reaching from boat to boat.

This made a bridge that would raise and lower as the water levels changed. Funa Tsunagi Ishi was the key element. The hole on top of the rock was used to connect each boat using rope. Thus the name, “Boat Connect Stone.” So, once again what does this have to do with praying for this city? It was the rock that held the bridge together. In spite of the floods, it was the foundation of connecting two groups. Sound familiar?

Eph. 2:14-20 For he (Christ) is our peace, who hath made both one, and hath broken down the middle wall of partition between us; Having abolished in his flesh the enmity, even the law of commandments contained in ordinances; for to make in himself of twain one new man, so making peace; And that he might reconcile both unto God in one body by the cross, having slain the enmity thereby: And came and preached peace to you which were afar off, and to them that were nigh. For through him we both have access by one Spirit unto the Father. Now therefore ye are no more strangers and foreigners, but fellow citizens with the saints, and of the household of God; And are built upon the foundation of the apostles and prophets, Jesus Christ himself being the chief corner stone;

Our firm foundation is Jesus Christ! He is the bridge that brought man and God back together in sweet fellowship. Christ, He is foundation that holds when the floods come! The relationship between God and us is pivotal on the Rock of Ages! It is not on the works of Buddhism or the prayers at Shinto Shrines. There is only one way to the Father, and that is in the Son! In Japan, Funa Tsunagi Ishi is no longer used, but is a reminder of what once brought the city together. Let it serve as a reminder to us that God desires that these people be brought to himself! 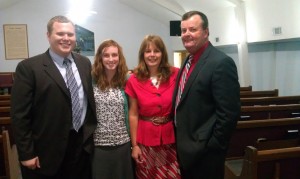 You know what it’s like to visit some friends that you haven’t seen in a few years? Well that’s what Sunday was like for us! We had a meeting at Grace Baptist in Brookhaven, MS where Wade Biggs pastors, and they are dear friends of ours. I wish we had longer to be with them, and fellowship. We praise the Lord that the services went amazing, and they took us on for support! I ask that you would keep them in your prayers as they reach out with the Gospel to the people of Brookhaven, MS!

It might have been a crazy Sunday afternoon driving from Brookhaven to Potts Camp, MS, but it sure was worth it! We literally drove from southern MS to northern MS between church services. I’m glad that it worked out, because we had a wonderful time with the people of Open Door Baptist Church. I love going to Church! Especially when everyone is in one accord to worship the Lord and hear from His Word! That’s always encouraging when you preach! After the service, Pastor Helmic said their missions conference was in June, and during that time they would be considering us for support! I ask that you would pray the Lord would bless their missions conference, and that we could become partners in taking the Gospel to Japan!