Chikushino is a rapidly growing city not far from Fukuoka, Japan, which is the largest city on Kyushu Island. Over the past decade, its continual development has caused the population to soar to 101,621 with a density of about 3,000 people per a square mile!

Futsukaichi Onsen is a popular hot spring on 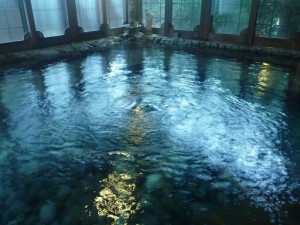 the outskirts of Chikushino City. This Onsen (hot spring) is believed to heal the diseases of all those that enter. Its original name Yakushi-no-Yu (meaning hot water able to cure all ill) Came from a legend about a Buddhist monk who built Buzo-ji Temple in the middle of the nearby mountain (Mt. Tenpai). His daughter suffered from a terrible skin disease and offered prayers for her healing. One night he had a dream in which a Buddha told him to dig for a hot spring in the nearby field, and to have her bathe in it.  He followed the advice and she recovered completely, according to the legend.

There are many other legends about the origins of hot springs that involves advice by Buddha, and that they would heal diseases. All this Reminded me of John 5 “Now there is at Jerusalem by the sheep market a pool, which is called in the Hebrew tongue Bethesda, having five porches. In these lay a great multitude of impotent folk, of blind, halt, withered, waiting for the moving of the water.” At the same pool lay a diseased man that had been waiting to be healed for 38 years. I’d imagine he had searched many places for a cure to his disease. Its hard to think of the despair he must have faced, never finding that which would make him whole, always struggling and never arriving at the pool in time. That is, until Jesus came! Jesus cured the man, making him whole!

Can you see it? Can you see the great multitude of impotent folk? The Blind? The Halt and Withered?

Those that are doomed in their sins, never finding the cure, always struggling and never arriving? How large a multitude! They fill the world! They turn to Buddha, Shinto, or nature for relief from their disease, yet neverfinding lasting satisfaction! There is one hope for them! Only one! Jesus!  When is the last time you told someone about Him?

← A Conference, a Wedding, and a 2,379 mile drive
Familiar Faces at New Churches →