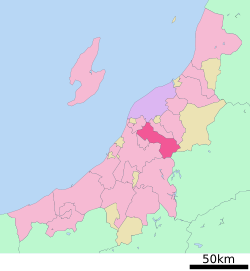 I don’t even know where to start with today’s Key City: Sanjo. My editor might have to rein me in if I get too wordy!

Sanjo is long and relatively skinny, running east to west and is basically cut in half by the Ikarashi River, which forms a “T” with Japan’s most famous river Shinano on the city’s western border. These great rivers help make the land very fertile, and farming has been the way of life for the people for millennia. To the east are dense forests and snow-capped mountains, lending the area great beauty.

Of everything I’ve learned about Sanjo, though, nothing is more amazing to me than its blacksmithing tradition. In 1625 the governor of the area,, found a way to help his

citizens survive the destructive flood season each year. He paid for blacksmiths from Edo (modern Tokyo) to come and teach his farmers how to make nails while their farmlands were underwater.

Today, you can visit the Sanjo Blacksmith Dojo, which still trains its students to work metal in a traditional way. Tourists can even take classes on building a fire, quenching, forging, grinding and sharpening.

Seibei Ootani knew his people could not survive as things were going, and that sentiment is still true in Sanjo. The people there do not know the Gospel, and they cannot survive as they are. They need the Savior!

Pray for us that we can plant churches that will still be training men to preach the Gospel after 400 years of saving lives!