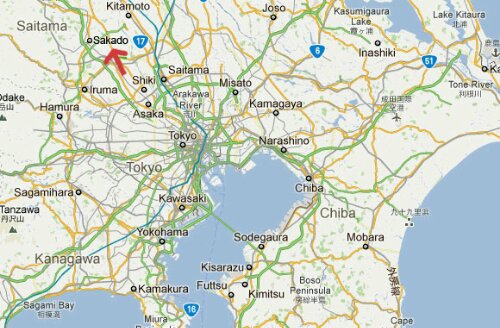 Do you ever get confused by Taoism, Confucianism and Buddhism? You aren’t alone! It just so happens that today’s Key City: Sakado gives us a great excuse to deal with some of these confusing terms.

Sakado City is home to the largest Taoist temple in all of Japan. It’s really huge, it’s incredibly detailed, and it’s beautiful. The temple’s yellow tiled roof is unique to religious sites, so it stands out and nobody has any doubt about what it means. Inside the building are several stone columns almost 20 feet tall. Each is carved from a single block, and the craftmanship doesn’t end there. The main hall, a cavernous room, has a ceiling made of hand-broken glass, over one thousand pieces in all. The structure of the hall itself is built to interlock without the use of any type of nails or screws.

It’s a very cool building, but what’s interesting about it to me is that Taoism isn’t a Japanese religion. It’s Chinese. Confucianism? Also Chinese. Buddhism? That’s Indian!

Japan does have it’s own religion, Shinto, but most people follow it in name only. They pay respect to it and occasionally pray, but few follow any of these religions very “religiously.” And who can blame them? None of these offer any real hope. None offer salvation or forgiveness.

In fact there is a famous Taoist saying, “The Tao that can be told is not the eternal Tao.” It basically means, “I can’t explain Tao, and you can’t understand it.” There are over 100,000 people in Sakado with a beautiful temple and a religion with no answers. They have plenty of temples and plenty of religions.

What they need is Truth. Will you help me give them the truth of Jesus Christ?