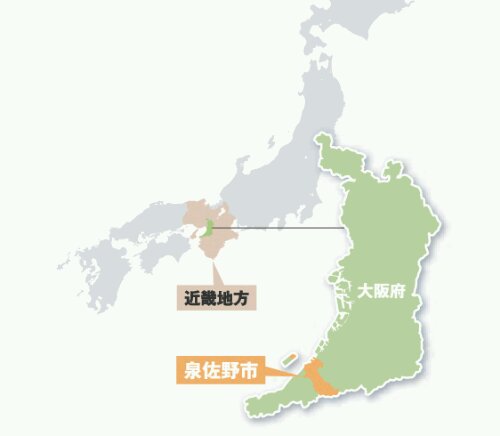 Irony can be difficult to define, but you often know it when you see it. I can’t think of any better way to describe the plight of today’s Key City: Izumisano.

In the 80’s and 90’s, Japan’s economy was bustling and the only way to keep up with that growth was to expand. There was only one problem with that, though: Japan is an island! Seems like a big problem, right? Not to the Japanese. They just decided to build more island…

Literally. They started constructing an island in Osaka Bay in 1987 and in 1994 opened Kansai International Airport on that man-made land. They built the massive Sky Gate Bridge from Izumisano to the airport and even developed an entertainment park and Japan’s second-tallest skyscraper.

At first everything worked well. The airport was busy, and tourists loved the amusement park. Businesses flocked to the city. But then the global economy stumbled in the early 2000’s and traffic at the airport plummeted. Businesses abandoned the area and unemployment and debt from the construction of the airport began to take its toll on the city.

In fact, the fate of the city is in such a state that in March of this year, the local assembly decided to lease the naming rights to the city. What does that mean? It means that corporations will have the opportunity to rename the city for up to 5 years. That’s just ironic, isn’t it?

Almost 30 years ago, Izumisano City put its faith in a booming economy and built a marvelous, state of the art airport to take advantage of their prosperity, yet today, that same airport is drowning the entire region in debt.

This city has almost no Gospel witness, and they still don’t know who to put their faith in. They are sinking with their sin debt. Pray that we can join together to get the truth to Izumisano City.